Rumbling is one of the main features of Pokéheroes. It allows users to find Pokedollars

and items, such as berries, honey, Mystery Boxes, keys, star pieces, gems, spray ducks, and weather balloons. It is still in its beta stage, meaning that some features, like battling wild Pokémon are not available yet, but will be available soon.

The Rumble base can be accessed by hovering over the Town tab located at the top every page, provided you have at least one

Sending Pokémon in a rumble mission

When sending a Pokémon out for rumbling, three options will be given to choose from:

There are three possibilities to obtain explorer bags:

Rumble areas will gain EXP every time they are explored (expressed by a percentage). If an area is fully explored, a new level of it will be unlocked.

As the level of an area increases, the rumbling results in that area will be better.

Variety of different items can be found by Pokemon through Rumble Missions.

Watching the Rumble overview
The Rumble Overview allows you to see the progress of the current rumble missions, and also allows you to retrieve a Pokémon when the mission is finished.

This page displays all the Pokémon that are currently in a Rumble mission. On each Pokémon, the following is displayed: 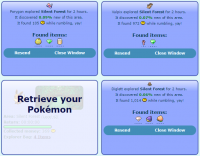 Retrieving a Pokémon
When the Pokémon is back, there will be an option of retrieving it. You cannot retrieve Pokemon while they are exploring an area.

Doing so will place all the items in your Item bag and add the Pokédollars to your account.

Once you send the Eevee out to explore one of the areas, it will take 20-80 minutes to evolve, and then 20-50 minutes to return. It will return evolved.

To unlock these missions/areas, you need to reach an Exploration Level above 5 in the following Areas:

Eevee evolves into Glaceon after exploring the Snowy Mountains.

Eevee evolves into Leafeon after exploring the Mossy Forest.

Eevee evolves into Sylveon after exploring the Playground.

Magneton evolves into Magnezone after exploring the Lightstone Cave.

Nosepass evolves into Probopass after exploring the Lightstone Cave.

Charjabug evolves into Vikavolt after exploring the Lightstone Cave.

You can send your Pokemon out to explore these special areas; and it may take them days. However, each area also has special requirements; for example...

Consider getting your Pokémon to a very high level before sending them on such a mission - they may be challenged by very strong Boss-Pokémon.

If your Pokemon loses the battle, it will return from the mission with your map.

After completing the Giratina Quest in the Ancient Cave, you will receive a Spooky Manor Map.

When sending out a Pokemon to the Yellow Forest, it will have the opportunity to find a Retro Egg, which will hatch out to be a Retro Pikachu. The Pokemon may also find

Tiny Mushrooms, and berries. Pikachu and Pichu can also be recruited while your Pokemon is out on the mission. There is a higher chance to find a Shiny Pichu/Pikachu via rumbling in the Yellow Forest.

The Yellow Forest is currently no longer unlockable due to the Retro Pikachu Event ending, but users who have unlocked the rumble area from the event can still send out their Pokemon. Retro Pikachu is still obtainable, but at a lower chance. Spiky-eared Pichu can also be obtained here.

During the ORAS Event, after completing three other tasks the user unlocked Route 102 and had to have a Pokemon explore it and return with a Lava Cookie as the last task.

Pokémon could also recruit common first-stage Hoenn Pokemon such as Wurmple and Taillow, but they could also very rarely find a Retro Poochyena, Retro Taillow or Retro Zigzagoon egg.

During the Hoenn Berry Battle from 16/09/17 to 06/10/17, it was possible to unlock Route 102 again, along with an update that made it possible for Pokémon to find a Retro Celebi.

Route 102 is currently no longer unlockable due to the Hoenn Berry Battle ending, but users who have unlocked the rumble area from the event can still send out their Pokemon. 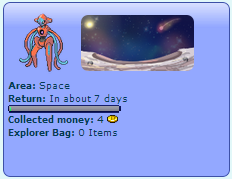 Space
If you have obtained a Deoxys egg (which is given to you by Prof. Rowan after completing your Hoenn dex), Rowan may randomly give you a quest to find a Brown Sack. The chance of Rowan giving you the quest is random each hour.

Once you accept the quest, he will ask you to find a Brown Sack from a specific Rumble Area. When you find the Brown Sack, you will have unlocked a new special Rumble Area which is "Space". It can only be explored by Deoxys. When sending your Deoxys to space, it has a chance of finding Star Pieces, Star Dust, or Meteorites - which are used to change Deoxys' form.

Alola
After completing the Daycare Owner's quest (requires Trainerlevel 20) and hatching an Alolan Vulpix you were rewarded with the Alola Rumble Area. Unlocking this quest can occur randomly on a sunny day.

Alola Rumble missions can last between 12 to 48 hours and can be done by any Pokémon. Pokémon can only bring back items, some Pokédollars and recruit an unlimited amount of Alola Pokémon or Alola Eggs. It is also possible to recruit Shiny Pokémon. (Note: You must have a free spot to claim an egg, or else you'll fail claiming it.)

Burned Tower rumble missions last one whole day and can be done with any Pokémon. You can obtain items, a random amount of Pokédollars as well as recruiting Pokémon or even Pokémon eggs. It is also possible to recruit Shiny Pokémon. (Note: You must have a free spot to claim an egg, or else you'll fail to obtain it.)

If you were lucky enough to win an upgrade during the Johto Apricorn Battle, you are also able to find Retro Eggs that might hatch into Retro Lugia or Retro Ho-Oh.

Galar
On 06/06/20 the Gem Collector received an update. This update added a quest, allowing you to receive the Galar Rumble Area after completing it.

All (Galarian)-Pokémon can be obtained through Rumbling, though some require the update.

All of the gems are obtainable through the Galar Rumble Area. You can also find a Dynamax Crystal, needed to Gigantamax certain pokémon.