The ORAS event is an event to celebrate the worldwide release of the new Pokémon Remakes, Omega Ruby & Alpha Sapphire. The site-wide event begun on 27/Nov/2014 and ends on the 12/Dec/2014

This event is split up into different tasks and is also introducing a new slot system. Every hour, new slots would be opened and 25 more members can join the event. Users had to be quick and claim a slot every hour. When claiming a slot, you will also need to pick an option. Omega Ruby or Alpha Sapphire.

(Click an image to enlarge) Once you have a slot in the event, you will have 4 different tasks to complete:

Pokemon exploring Route 102
Once you complete the first three tasks, you will unlock a new special Rumble Area, Route 102. To proceed to the other half of the ORAS event, you will need to send out any Pokemon to explore this rumble area. The Pokemon you send out will be out exploring the area for 24 hours, and will return with x1

Lava Cookie which is needed to proceed to the other half of the event.

Other than finding Lava Cookies, it is also possible to find and obtain a Retro Poochyena, Retro Taillow and a Retro Zigzagoon egg. Finding the following Retro Pokemon will be extremely rare.

If you have unlocked this area, you will still be able to send your Pokemon to explore the area even after the event ends. 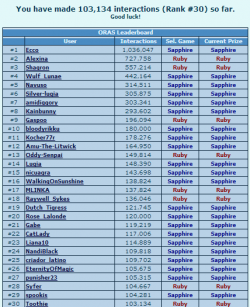 Leaderboard
Once you have a Lava Cookie, you are entered in a Mass Clicking contest. Users will have the chance to win a very special ORAS based prize. The prize is determined by the game that you chose at the beginning of this event.

Kyogre on your userbar. Icon changes to Groudon, Rayquaza and to Kyogre daily.

Clicking the Kyogre/Groudon/Rayquaza icon on your userbar will send you to the Mass Clicking event.

Your task for this event will be to interact as much as you can! The users with the most interactions will get a prize at the end of the event.

The prizes which were distributed were Primal Groudon and Primal Kyogre.