The weather may change randomly every hour. The weather can fluctuate quickly, but also keep for a while as it is. Each Castform icon in the userbar represents the weather on the game, and for each specific weather, a specific type of Pokemon will gain 50% more EXP. This does not affect eggs.

If you hover over the Castform Icon on-game, it will say what Pokemon type will gain 50% more EXP. You can also click on the icon to obtain the Weather Forecast of the day.

Castform Weather forms were released and obtainable as Pokemon on 25/06/14.

Using a special Weather balloon on one of your Castform's will make it evolve, depending on the current weather in Emera Town.

Weather Balloons can be found rarely on rumble missions. 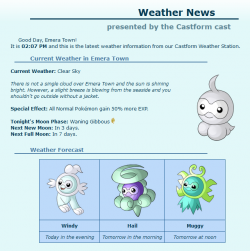 This is a new feature created on 3/Feb/2015, which allows users to be aware of future weather conditions.

The page states the current server time and the current weather (with an image of the current Castform as well as a short description and its effects). There is also a table shows the next 3 consecutive Castform, with the name and period they will appear later.

In addition to that, you can also check the moon phase to see when the Full Moon Island and New Moon Island will be accessible.