The Valentine's 2017 Event is an event that start 8/Feb/2017 and lasted until 14/Feb/2017. During this time, users were to obtain Sweet Hearts and send out Valentine's Cards to other users.

If you were able to send a card to three (3) different users, you would be able to obtain a brand new Event Pokemon on February 15th. The more Valentine's Cards you sent out, the higher chance of obtaining a Shiny Version of the mentioned new Event Pokemon increased. 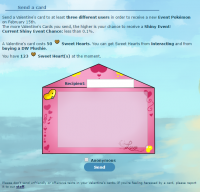 Every Valentine's Card cost 50 Sweet Hearts each to send. Granted the user hadn't put you on their blocklist, you would be able to send them to any user. You also have the option of attaching a message or anonymously sending the Card, though neither of the two are required.

Sweet Hearts are obtained by interacting or by sending a Dream World Plushie to another user. Unlike previous years, Sweet Hearts could not be obtained via Rumbling.

Once obtained, they could only be used to send Valentine's Cards to other users.

Obtaining a second Shiny Event Plushie was harder than the first!

New Normal Plushies were added to the Dream World Shop as well, including Starly and Heliolisk.