"Shaymin is back in Emera Town and wants to make kind-hearted trainers a very special gift from 28/July/2016 to 04/Sep/2016. Start interacting in order to have a chance to get one of these strongly limited presents."

The first ever Summer Time Shaymin event was held back in 2013 - The legendary Pokémon Shaymin visited Emera Town for the whole summer and generously gave out presents to trainers. The event was then repeated in 2014, 2015, 2016, 2017, and 2019 and Shaymin came back with even more limited gifts.

Shaymin is a annual event usually held for the whole month of August.

Shaymin icon appearing on a userbar

In order to meet and obtain Shaymin, users had to interact. There is no set interaction requirement - it will appear randomly after doing interactions. For some users this will take a few hundred or thousand although the number of interactions can be much more than that. When Shaymin wants to meet you, a small icon

pops up in your Userbar.

It is not possible to have multiple Shaymin in your User bar at the same time. You have to accept Shaymin's gift in order to meet it again, meaning it will stay on your Userbar until you accept one of it's four gifts. 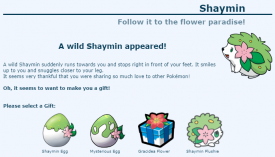 Shaymin's four gifts
This year, Shaymin will be back with four gifts. A Shaymin egg, a Shaysola egg, a Gracidea, which is used to change Shaymin into it's Sky Form, and a Shaymin Plushie. Users can only pick one of these four gifts each time they encounter Shaymin.

As of 2017, Shaymin introduced a new Event Pokémon, Shaysola as one of its gifts.

Note: The Shaymin & Shaysola egg will not break your shiny chain, and it is placed directly into your party if you have a free space. 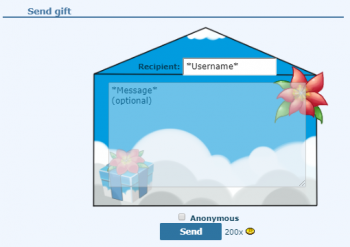 Sky Gifts
Aside from obtaining a Shaymin, users are also able to send other users Sky Gifts. Each Sky Gift you send to a user will contain some sort of gift/item. The gifts which can be obtainable from Sky Gifts are:

Pokédollars. If you have sent 3 gifts already, further gifts will require nuggets, starting at x5

Along with sending a Sky Gift to someone, you are also able to type in a message which the other user may read, which is completely optional. When sending a gift, you can choose whether you want it to be anonymous or not.