The Shadow Radar was introduced on 1st July 2019 to celebrate PokéHeroes 6th anniversary, in memory of the Pokeradar, back then called the Shiny Radar. The Shadow Radar is a permanent feature.

Our local computer scientist and favorite nerd in town, Bill, has developed a new device, called the Shadow Radar

. This item makes it possible to find these Shadow Pokémon in the wild. It is available in the Item Shop after reaching Trainerlevel 20. You can either buy it with PokéDollars or with Nuggets. 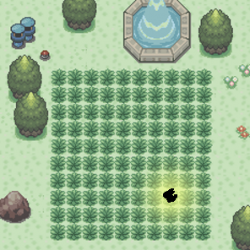 Pokémon Shadows pop up randomly.
After purchasing the Shadow Radar you will be send out on a 10x10 field of tall grass. Pokémon-Shadows

will randomly appear that have to be clicked on.

If it turns out to be a regular, non-shadow Pokémon, it will start a chain of this species and count up in your Shadow Radar. The longer your chain, the higher will be the chance to find a Shadow version of it. However, if you find a species that is different to your chain, then your chain will break and you'll lose the game. 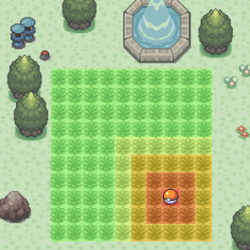 After challenging a Pokémon on a certain spot (Poké Ball symbol), try to avoid the grass spots nearby (red area) in the next round. Pokémon of the same species are most likely further away (green area).

Tip: Remember the field where you had you last Pokémon fight. The longer the distance between this field and the field of your next fight, the higher the chance of finding the same Pokémon-Species. You don't have to click on every appearing shadow. Sometimes it's better to wait a bit until it appears in a spot that is further away from the spot where you challenged the last Pokémon.

Also make sure to have enough

Poké Balls with you! They are mainly available at the Item Shop. Some Pokémon are harder to catch than others and take a few more times. And not to mention that there's also a slim chance of the Shadow Pokémon fleeing during the fight, so maybe also bring some

Some species are rarer than others and require more experience. After catching more and more Shadow Pokémon, you will start to find rarer Pokémon out there.

Note: As soon as you find a Shadow you didn't encounter before, it will show with the text NEW beside the Shadow sprite.

Currently, only Pokémon from the Kanto region and Johto Region are available as Shadow Pokémon. In the future, more regions will be added!

Shadow Radar Upgrade (Johto). This upgrade can be bought over at the Item Shop for

Shadow Pokémon cannot evolve. They can not be shiny. They also cannot be hatched from Pokémon eggs.

Below you can find all the Shadow Pokémon sprites and their Rarity.