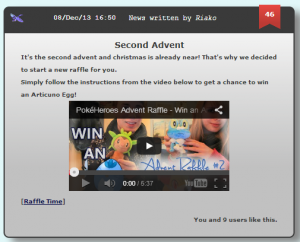 The Announcement of the this raffle in the Index Page
The second Advent Raffle is part of the Advent 2013 events.

In the raffle, you watch a video made by Riako. In the video he will explain what you need to do to take part in the Raffle. You would have to guess the three Pokémon mentioned in the video.

To participate, users would need to put the three Pokemon's Name in the raffle, and then take part. You were only able to take part once. Users had to make sure that they write their names properly, as they wouldn't be able to edit them later.

If you are lucky enough to win the raffle, you will receive an Articuno Egg.

The winners were announced in the Second Advent Raffle video. The users who recieved the Articuno Egg were...