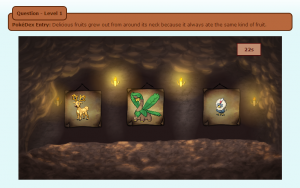 Example of a Royal Tunnel level.
The Royal Tunnel is a minigame on Pokeheroes that allows you to obtain Regirock, Regice, Registeel, Regieleki and Regidrago. It is found under the "Town" tab upon reaching Trainerlevel 15. It was implemented on January 5, 2014. The two new Regis were added for PokéHeroes' 8th anniversary in 2021.

To begin an exploration, you must pay the amount of Pokedollars needed for the path chosen. There are five paths to choose from, and each one gets unlocked after the previous one has been completed.

Tired or have to leave the keyboard? Take a break every X01 Level!

At the end of each path (with the exception of the Endless Path), you can find an egg containing one of the Regi quintett. The Beginner Path gives Regirock, the Advanced Path gives Regice, the Pro Path gives Registeel and the Split-Decision Path gives Regieleki and Regidrago.
At the Endless Path you will be able to receive some more Regi-eggs randomly and every 1000, 2000, 3000 etc. level you will receive a random Shiny Regi-Egg!
Note: You need a free space in your party to be able to receive a Regi-egg!
There is a small chance of receiving a random gem after correctly answering a question and you can reveive up to 100 gems each day.

After you have unlocked the Endless Path you are also able to solve the Regigigas-Quest.