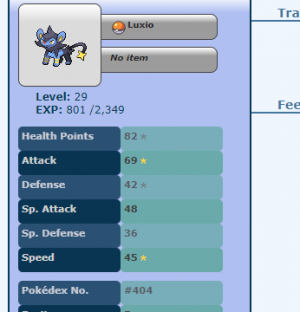 A Luxio with perfect Attack and Speed IVs, as well as good HP and Defense IVs
Individual Values (IVs) are hidden values of Pokémon influencing their individual stats (HP, Attack, Defense, Sp. Att., Sp. Def., Speed). For each of the six stats, a Pokémon has an IV value between 0 and 31 influencing the overall absolute stat value. The higher the IV value, the higher the Pokémon's absolute value on that stat. Perfect IVs (31) are symbolised by a golden star

next to the stat value. Very good IVs (29 and 30) are symbolised by a silver star

. With the exception of IV breeding and the Bug Hatching Contest, IVs are entirely random. Every value between 0 and 31 has the same chance of occuring.

Destiny Knot to hold. This item will increase the likelihood of passing down an IV value from 5% to 20%. Thus, if both parents hold this item, there is only a 60% chance for each stat that a random IV and not an inherited one is assigned. This is especially useful when the parent already has good or perfect IVs. It is not recommended to use when the IVs of the respective parent are mostly bad or unknown.

Note that these inherited IVs are currently lost (i.e. randomised again) when the egg is released to the Tall Grass.

The IVs of Pokémon obtained from the Bug Hatching Contest are strongly influenced by your performance at the minigame. The Contest uses the term "Talent" to roughly describe how many IVs an egg will have. For example, eggs with the rating "No talent" or "Below average" are likely to have IV values less than 10; whereas eggs with the rating "Very Talented" and "Super Talented" have a very high chance of showing good to perfect IVs on some stats.

In other words: Roughly 1 in 1 Billion.

When IV breeding with perfect IV parents (both holding a Destiny Knot), however, the chance is strongly increased. Since a Pokémon then has a 40% for each stat to inherit the IV from the parents, the new chance is (slightly simplified) calculated the following:

To use this method, you'd first have to have perfect IV parents, however. In order to achieve this realistically, you'd have to work on this problem iteratively: You start by breeding with two parents with at least one (preferably three or more) perfect IV stats. Both hold Destiny Knots in order to increase the chance of passing down their IVs. You'd then wait for the parents to produce an egg which inherited the perfect IVs plus one more (which was gained by luck). This child now becomes part of your breeding couple in order to increase the amount of IVs in the next iteration.