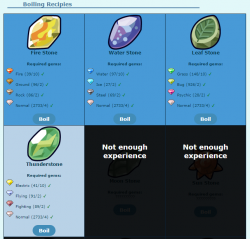 You are only given a certain amount of seconds to complete the minigame. If you don't succeed within the given time, you will get your gems back and have a 10-minute cooldown before you can try again.

If all the gems have been placed into the cauldron correctly, the cauldron will begin to boil and you must wait the certain time period given before claiming your prize. The waiting time can be cut in half with an Odd Incense. This item will be used automatically if you have one.