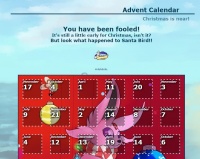 The 2017 April Fools Event was an event that was only available for users to participate on April Fools, 01/04/2017, though it remains accessible for viewing.

During this event, players were "fooled" into believing there was an Advent Calendar lasting the remaining 286 days until Christmas. For April 1st, they were given tasks. Once those tasks had been completed, a user obtained a Santa Bird which transformed into a Santa Birb on the following day.

The Calendar remains accessible here, though the user will not be able to open any doors.