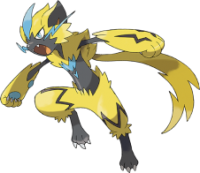 After the immense thunderstom that we experienced last night, a mysterious Pokémon from the Alola-region has been sighted near our town square!

Zeraora is a Legendary that was released through a winter Event from 22nd February 2019 to 18th March 2019.

It also appeared from:

Zeraora can be obtained by interacting with Eggs & Pokemon. An icon of Zeraora will randomly appear on your userbar while interacting. If you see the icon, you can click on it to get the plushie or egg, provided you have a free space in your party to obtain the egg, but if you don't, you always have time to make space. Note that it is not required to have a free slot in the party for it to appear in the userbar.

Zeraora will appear randomly on your userbar while interacting.

Getting Zeraora
After clicking the Zeraora on your userbar, it will show you a clearer image of it, and will ask you which gift you would like to claim.

After accepting the gift, you will have a Zeraora Egg in your party or a new Plushie in your plushie collection.