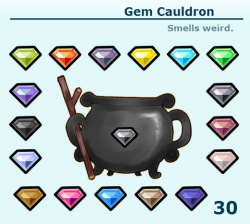 To play this minigame, you must have at least one of each type of gem in your Item Bag. Once the game has started, you will be shown a cauldron that is surrounded by gems and has a gem in the center. You must drag the depicted gem into the cauldron. When you drag the correct gem inside, another gem will be shown. The process must be repeated until you have put all 17 gems in the cauldron. You have 30 seconds to complete the minigame, and if you put in the wrong gem, all gems that have been put in prior will be lost. You will not regain your gems even after a successful boiling. Once you have completed the minigame, you must wait two hours for the boiling to finish and you can claim your prize.