Difference between revisions of "Safari Zone"

Entrance to the safari
The Safari Zone is a place introduced on the 18th of April 2015, during the 'Big Spring Update'. It is unlocked when you reach Trainerlevel 12.

In the Safari Zone, you are not allowed to battle any Pokemon to catch them, like in the original games. Instead, you catch them with specialized Poke Balls called Safari Balls.

Safari Games can only be played on computers/laptops, and not on tablets or mobile phones as a keyboard is needed to play.

When you start a game, you are provided with 15 Safari Balls and 40 Poffins. However, there is a time limit of 5 minutes to explore the Safari Zone in one game.

Double-clicking enables throwing a Safari Ball or a Poffin, which can be interchanged by pressing the Q key on the keyboard. Once used, however, the Poffin/Safari Ball is spent, despite not being eaten or capturing a Pokemon.

Movement about the Safari Zone is enabled by pressing the letters W, A, S and D, which represent up, left, down and right respectively.

Catching a Pokemon is often very difficult, like in the games, only the Pokemon are constantly moving, so predicting where to throw a Safari Ball or a Poffin is key.

Poffins are used to slow down and make Pokemon easier to catch, but the Safari Balls have a possibility of catching the Pokemon without the use of Poffins. 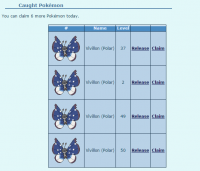 You can only adopt 6 Pokémon per day
After Pokemon are caught, they will appear on a list on the Safari Zone page, which will be shown after your game ends. The list will show the Pokemon's sprite, name, level and an option to claim or release the Pokemon. You can only claim 6 Pokemon per day, but the ones unclaimed will remain on the list even after server reset unless you release them.

However, there is a chance of Pokémon being shiny without having a safari chain, but with one, the chances are increased.

Note: Shiny Pokémon from the Safari Zone also have their own sprites, like the Honeytree.

Certain legendaries may appear in the Safari Zone, given that their respective summon items are present.

So far, the only legendaries that can be found are: