The Johto Apricorn Battle is an event that was initially introduced and took place during 22/May/2018 to 12/Jun/2018, and had re-occured during the following time periods:

Johto's Apricorn Battle could be accessed from the Emera Square.

After the event ended, the event ingredients and recipe would be removed from everyone's account to make sure everyone had an equal start by the time the next Apricorn Battle had started.

In order to qualify yourself in the actual Berry Battle, you had to clear three tasks first:

After fulfilling all the tasks, a new rumble area would be unlocked: the Burned Tower.

The recipe for the Johto Cookie is only displayed after you have solved the first two tasks. Lyra will provide you with one of each apricorn as well as the following recipe to get you started. 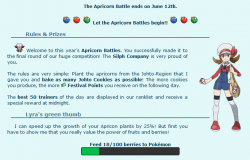 Once you got the necessary qualification to take part in the Apricorn Battle, you were able to participate in the daily contest of brewing as many Johto Cookies as possible. Every hour, the finished Johto Cookies would automatically be picked up by Lyra and counted towards your total number for the day. The top 50 users who made the most Johto Cookies in a day would receive a prize.

In addtion to that, it was possible to boost the growth speed of your berries by feeding a fixed number of berries to Pokémon through Interacting. All you had to do was to fill the green bar to activate the growth spurt, and then the bar would reset and you could refill it and activate it again. Each activation reduces the remaining time on all of your plants to grow by 25%. So, say for instance, if you have some plants that have exactly an hour left to grow, after activating the boost they would then have 45 minutes left to grow. The more time your plants have left to grow, the more effective using boosts are.

After getting into the top 50 ranklist of the daily contest, you would be given the chance to either unlock an update for the Burned Tower that makes it possible for your Pokémon to find either a Retro Lugia or Retro Ho-Oh egg while rumbling there, or a choice to claim a Retro egg that would hatch into either Retro Marill or Retro Girafarig. There was also chance of them hatching Shiny.

Additionally, you would receive an amount of Festival Points, depending on the number of Johto Cookies you made (varying amount) as well as which rank you reached (fixed amount as listed below).

This amount will be rewarded additionally to the varying amount that you earn with the Johto Cookies.